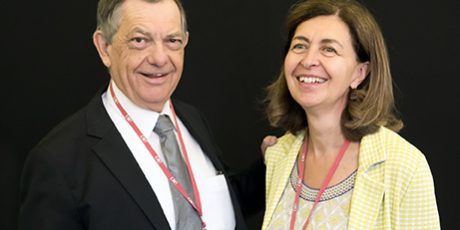 On behalf of WRO I attended the 83rd OIE meeting in Paris, France from 26-28 May 2015. The first highlight was the election of a new Director General by the national delegates representing the Member Countries of the OIE, by secret vote in accordance with the rule “one country, one vote”. Dr Monique Eloit, the candidate for France and the Member States of the European Union, was elected for a five-year term of office (2016-2020).

After three consecutive terms of office as Director General of the OIE, Dr Bernard Vallat will pass the baton to the current Deputy Director General on 1 January 2016, who will then implement the Sixth Strategic Plan, which coincides with her term of office. Based at the OIE Headquarters in Paris, Dr Eloit will shape the destiny of the Organisation and manage the teams working at the Headquarters and existing 13 regional and Sub-Regional Offices.

During the last fifteen years under his leadership, Dr Vallat has helped to extend the Organisation’s mandate to include animal welfare, while consolidating its activities in the fields of animal health and animal production food safety. He has participated effectively in the management of global crisis (influenza, foot and mouth disease). He has also encouraged the OIE to involve itself in several new fields of activity aimed at improving and strengthening the governance of Veterinary Services, and to develop a number of innovative programmes.

Following the election of his successor, Dr Vallat offered warm words of encouragement to the newly elected Director General. “Dr Monique Eloit was already working alongside me when I was Chief Veterinary Officer of France in the 1990s, and she joined me at the OIE in 2009 as Deputy Director General. I have every confidence in her ability to carry on the task developing and strengthening this Organisation, with the collaboration of all, national Delegates, partner organisations and those involved in animal health and public health, throughout the world
• to promote excellence, transparency and solidarity
• to implement the mandate we have been given, namely protecting animals, preserving our future.”
Dr Bernard Vallat, OIE Director General since 2000, congratulating Dr Monique Eloit, incoming Director General, elected this morning for a five-year mandate (2016-2020).

“During these past fifteen years, the OIE has considerably developed and diversified to adapt to new global health issues and changes in the Veterinary Services. The OIE’s legitimacy has been strengthened on the international stage. Its standards are the reference in the field of animal disease prevention and control and for animal welfare, and are recognised as such by the World Trade Organization (WTO),” declared Dr Monique Eloit after her election.

“I shall endeavour to enhance the visibility and the performance of the OIE, on the one hand by strengthening the control of animal diseases, including zoonoses, with the involvement of the Delegates, and on the other hand by developing new partnerships and collaborations in the field of public health and food safety.
I shall accord a higher level of priority to the health status of farmed animals, both to protect health and to support the socio-economic development of the animal production sector.”