62ND MEETING OF THE SPS COMMITTEE 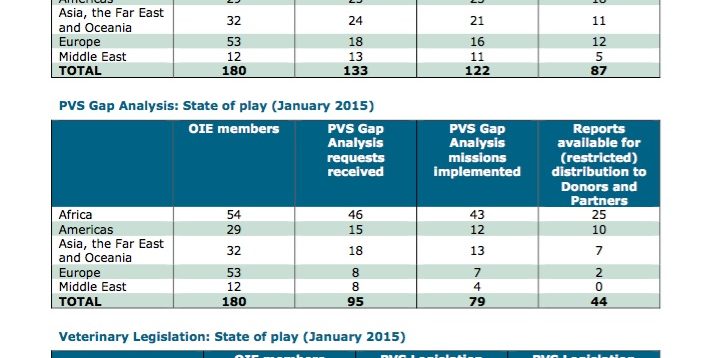 COMMUNICATION FROM THE WORLD ORGANISATION FOR ANIMAL HEALTH (OIE)

The following communication, received on 6 March 2015, is being circulated at the request of the OIE.

The OIE is pleased to provide this update for the information of SPS Committee Members. This report focuses on: 1) developments in the OIE standards for terrestrial and aquatic animals; 2) the launch of The Guide to Terrestrial Animal Health Surveillance; 3) the third OIE Global Conference on Aquatic Animal Health: Riding the Wave to the Future; and 4) capacity building using the OIE PVS Pathway.

1 – DEVELOPMENTS IN THE OIE STANDARDS FOR TERRESTRIAL AND AQUATIC ANIMALS

1.3. The OIE draws the attention of WTO Members to the following important developments.

1.4. The revised chapter on FMD that will be proposed for adoption this year represents the culmination of several years work by an ad hoc group of experts and the Specialist Commissions. Each draft circulated for member countries’ comments attracted a large number of comments and suggestions which have been systematically addressed by the ad hoc group and the Specialist Commissions.

1.5. In response to member countries’ requests for additional definitions of “official emergency vaccination”, and “systematic vaccination”; and revision of the waiting time for recovery of free status without vaccination when vaccination is used in response to an outbreak the Code Commission considered these requests to be part of a broader issue on vaccination to be addressed in the future, probably by development of a specific horizontal chapter on vaccination programmes. The Code Commission has recommended the Director General establish an ad hoc group to address this subject prior to its September 2015 meeting.

1.6. Urgent amendments to the BSE disease articles are being proposed this year to prevent a country’s BSE categorisation status being adversely affected by the occurrence of the spontaneously occurring condition, “atypical” BSE.

1.7. In proposing these amendments, the Specialist Commissions also noted that the exposure assessment detailed in Article 11.4.4. of the BSE chapter should be conducted regardless of the outcome of the entry assessment because of the possibility of recycling “atypical” BSE.

1.9. The chapter on infection with ASF virus has been updated taking into account the advice of an ad hoc group of experts, and the recommendations developed from the technical item on “African swine fever: new challenges and measures to prevent its spread” at the 2014 OIE General Session, and the subsequent OIE and the International Council for Game and Wildlife Conservation joint international meeting on early detection and prevention of ASF and other animal health issues at the wildlife-livestock-human interface.

1.10. This chapter, first adopted last year, has been revised in response to member countries’ comments. Although many member countries sought greater detail and clarification, the Specialist Commissions noted that this chapter was developed as a general principles document intentionally. The Code Commission recognised that several member countries have concerns over this new concept, due to the absence of the supporting biosecurity plan and the OIE implementation guidelines, but these are both under development. These will incorporate the key concepts and principles for establishment and maintenance of a high health status subpopulation or compartment. The biosecurity plan will be developed by the private sector partners: Fédération Équestre Internationale (FEI) and the International Federation of Horse Racing Authorities (IFHA). Whilst it is possible that some of the details could be incorporated in the Terrestrial Code in the future, for the moment the chapter is intended to address the key principles and concepts only.

2.1. The Guide to Terrestrial Animal Health Surveillance was developed by international experts in surveillance methodology and takes into account the complexity of animal health management, the diversity of the animal kingdom and the variety of situations in the 180 OIE member countries.

2.2. It provides a framework for animal health surveillance activities carried out by national Veterinary Services and other competent authorities in partnership with public sector veterinarians, diagnostic laboratories, animal owners, forest wardens, hunters and other stakeholders. This handbook can be purchased from the OIE Online Bookshop, accessible through the OIE website: http://www.oie.int.

3 – THE THIRD OIE GLOBAL CONFERENCE ON AQUATIC ANIMAL HEALTH: RIDING THE WAVE TO THE FUTURE

3.1. The 3rd OIE Global Conference on Aquatic Animal Health was held at Ho Chi Minh City (Viet Nam) from 20 to 22 January 2015. This Conference was one of a series of global conferences that began in 2006 aimed at raising awareness of the importance of aquatic animal health, and building a global framework for improving the management, prevention and control of aquatic animal diseases.

3.3. The Conference served as a reminder of the crucial importance of implementing OIE standards, both to safeguard aquatic animal health and to facilitate safe trade. To be able to implement them, the Veterinary Services and the Aquatic Animal Health Services must have the appropriate competency and capacity. However, with most aquaculture production originating in developing and emerging countries, there is also an on-going need to strengthen the capacity of all member countries in this respect. The OIE provides its member countries with support, notably through its PVS Pathway for evaluating the performance of Veterinary Services and/or Aquatic Animal Health Services.

3.4. The conference discussions served to achieve a greater awareness of the need for good governance of the Veterinary Services and Aquatic Animal Health Services, including their public and private sector components, and to encourage veterinarians, aquatic animal health professionals and other partners to play their part in ensuring that products derived from aquaculture are produced without posing a health risk to other animals or to humans. The importance of partnerships between the public sector and the various private sector stakeholders was underlined. Emphasis was also placed on the need for the rational and prudent use of antimicrobial agents in the sector.

3.5. The Conference recommendations, presentations and abstracts are available at:

4.2. A summary of OIE Members’ engagement in the PVS Pathway may be found at Annex 1.